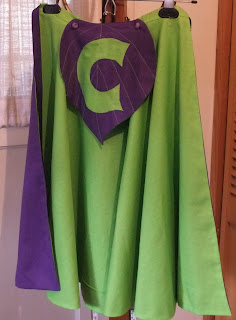 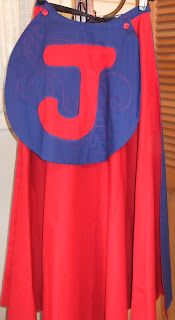 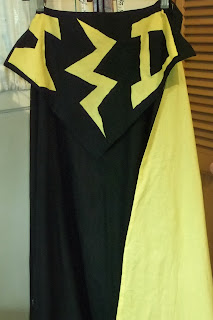 I just made three"super hero" capes for my Grand Nieces and Nephews in Minnesota, and a friend suggested that I post the directions here on my blog. To handle heavy play, I chose to make my project out of pre-washed, cotton broadcloth, rather than something shiny or slinky. I consulted with the two older children about what colors they preferred, and whether they had any ideas for their personal logos. I think it aids in the development of creativity in children if you can ask for their design input on a project. The capes have draw-strings that go through a tube binding at the neck edge, allowing the cape to gather tightly against the neck. The additional panels that display the child's logo button onto the neck edge, with buttons placed on both sides of the cape to allow to color changes during play. By allowing the panels to be removed, the capes can be used by a variety of children, regardless of alphabet letter or symbol, and can serve in a variety of fantasy situations. In addition, as the older children outgrow their cape phase, the capes can still be used by younger siblings.

1. Start by cutting a half circle out of cloth, with an even smaller half circle cut out of the very center of the straight line (this will be the neck area). Since most fabric is about 45 inches wide, you can make a cape up to about 40" long with regular yardage. After researching cape lengths for super heroes, I aimed for about knee-length as the finished length of each cape. Obviously, that differs from child to child, so measure them before you start.
Let's say we're making a 36" long cape. Lay a single layer the fabric out on the cutting table without folding it. Measure along the selvedge 36" up from the cut end of the fabric. Now measure about 8" further along the selvedge, mark it, and then once again measure 36" along the straight edge. The 8" area will end up as the neck edge, and you can create a circular, or slightly oval shape here, measuring 4" in from the edge for the depth of the radius. Chalk the curve for this neck area. Now measure 36" down from you neckline all around Your layout will end up looking like one-half of a circular skirt pattern. Cut out this first shape.

2. Cut a second cape shape out of contrasting fabric, using the first one as your guide. I just pinned mine with right sides together, so I could move right on to the sewing stage.

3. Sew the two capes together, leaving only the neck-line area at the top unsewn.

4. Turn the whole thing inside out and press all the seams. Try to handle the curved area of the neckline carefully to avoid stretching and distortion.

5. Utilizing the scraps of fabric left from the sides, cut a strip of cloth 2 3/8" wide and a bit longer than the neck opening.

6. With both layers of the cape together, sew the strip to the neck edge along one side, using just a 1/4" seam allowance.

7. Fold the ends of the strip to the inside, even with the front edge of the cape, and stitch them down.

9. Bring this folded edge down to meet the first neckline stitching line and top stitch it in place, thus forming a draw-string tube. I used 1/2" gross grain ribbon for my draw string. Run your drawstring through the neck edge, and then secure it with a perpendicular stitch line right at center back so it can't pull out of the casing. The basic cape is now done. Stop here if you're looking for EASY!


For the panels, just come up with something that means something to the super hero for whom you are working. Young children are usually interested in their own initials, which I used here, but shapes of any kind are appropriate. Again, do a design consultation with the child!
1. Design the panel shape. Working with the cape out flat, design your panel shape with newsprint to work with the scale of the cape. I cut each of my panel shapes to more or less follow the curve of the cape's neck edge (which is going to be slightly gathered up with the draw string) along the top, and then just invented a shape that worked with the child's initial. Remember to allow for your seam allowances as you make your design (but you really only need 1/4" allowances.) You'll see that one of my panels is shaped like a leaf, one is somewhat oval, and the third is a sort of a pentagon. Be creative!
2. Cut two panels, one of each of the colors, once again using the scraps left from cutting the half-circle.
3. Sew the panels together just like you did the cape, leaving the neck opening unstitched.
4. Turn the whole thing right sides out, working through the neck opening.
5. Carefully clip along the curve edge of the neck opening, and fold the raw edges to the inside.  Top stitch them together, resulting in a completely enclosed panel.
6. Next, design a pattern for decoration and chalk it onto the panel. Of course, you could applique a design onto your panel, but I chose to use a method utilized by the San Blas Indians where one cuts through and removes the top layer to show the layer beneath. (The Indians work with multiple layers, resulting in intricate patterns of many colors!)
7. Set your machine to a medium-wide zig-zag stitch that is very close together, and stitch around your drawn design, stitching through BOTH layers of the fabric. Turn the panel carefully as you work, so you don't distort the fabric. Zig-zag stitch around your complete design.
8. Carefully separate the two panel fabrics within the zig-zagged line using slightly dampened fingers. With a sharp-pointed scissors, cut through the layer to be removed, and then cut away all of that fabric right up to the edge of the zig-zag stitching. This leaves a contrasting pattern or letter showing. If you have applique scissors, they work well here.
9. At the upper outer corners of the panel, add one button hole at each end of the neckline edge.
10. Finally, sew buttons on both sides of the cape (for a total of 4) so the panel can be moved from one colored side to the other colored side.
ONE FINAL NOTE!
If you're working with fairly light-weight fabric, you want want to fuse interfacing onto the underside of the fabric where the button holes will be sewn. This will adequately reinforce the button holes for heavy play use.
Posted by Doozie Does It! at 3:53 PM

Doozie Does It!
Bainbridge Island, Washington, United States
I've been a professional seamstress for over 49 (!) years, as well as a writer for THREADS MAGAINE, and now I'm sharing loads of my sewing secrets with you. Want to learn a specific skill? Ask me, and I'll answer if I can. You can learn more about our business at www.DoozieDesignServices.com